“Look you can see them there on the stem” he points “the ant is milking them and protecting them at the same time – it’s a naturally symbiotic relationship.”

As I focus on the stem, Jules sprays a jet of something from a bottle, quite possibly a Novichok derivative originally designed for door handles and scrapes all the aphids into a tissue which he quickly dispatches into a black bin liner. We’ll never be quite sure how deep the Aphid connection goes although on this evidence he doesn’t appear to be a particularly worthy champion of the species.

I’m in the garden of Jules Hamer aka Aphid Moon, to find out more about the legendary UK psytrance producer, what tickles his intellectual fancy and his next musical moves. Jules it turns out got quite excited about the recent discovery of gravity waves, and also previously the Higgs boson a while back.

‘Gravity Wave’ – fittingly is the title of the forthcoming album to be released in June this year on Aphid Records featuring Jules in collaboration with various established / up and coming producers including Hypnocoustics, Ajja, Section 8, Tron, Nirmal, Psibindi, Continuem, Alta and Kaptain Kairos.

How would you describe the sound you’re going for on the album?

How long do you normally spend working on a track?

“From start to finish about a week, starting either with a kick and bass groove or some interesting sounds or riffs. I tend to work a lot printing takes into audio and editing the results to get a fresher more improvised effect.”

Future plans after the album?

“The plan is to follow up with a string of EPs from my solo project Aphid Moon plus launch a new collaborative project which is still in the planning stage although there is a taster on the upcoming album. I can’t reveal the identity of the collaborator as there is an ongoing investigation and it would be wrong of me to comment at this time. I also have to build a new studio this summer as I’m moving it out of my house and additionally will be updating my website: www.aphidmoon.com with help from the highly talented team at www.dreamwebsolutions.biz”

How do you balance music with other obligations?

“This is a struggle but I have got used to writing music on my laptop with headphones (not the final mix or production) so I can continue with tracks whether on trains or planes of wherever I am.”

“I’m always amazed at the world our reality the mystery of it all. People that make an effort to change reality for the better. The search for truth, food, music, art, sport and science.” 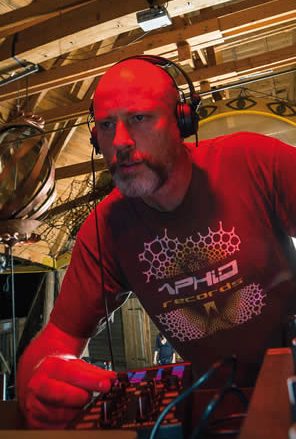